What schools could learn from chess

Chess is the great equalizer. Learning and mastering chess takes ability, drive, passion, curiosity, and hard work. Chess teaches humility, patience, concentration and an open mind about people from all walks of life. It guarantees moments of defeat and teaches how to rebound from failure. 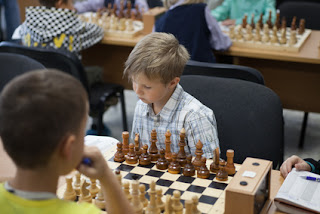 And schools could learn a lot from how it's done.

Chess tournaments group opponents based on their "rating," which is calculated from previous wins and losses. Gender, race, language fluency, or age have no bearing. Five-year-olds compete against 50-year-olds. It doesn't matter how long you have practiced the game, how old you are or where you have gone to school. Yes, you can find clubs for young children; however, real-world tournaments focus on the game, not on assumptions about inherent differences based on age or other characteristics.


Chess isn't for everyone. Even though it is a relatively low-cost activity, boosts academic achievement and cognitive abilities, and has shown benefits in inner city schools, it certainly won't interest everyone. Schools provide a valuable service when they offer chess classes or clubs to their students. But not every student will be drawn to chess - any more than creative writing or woodshop.


What schools can learn from chess is more than just the educational benefits it provides; it is how the framework, process, and incidental effects of the game itself can be translated into the classroom.


Some important lessons that schools could learn from chess:


1. The recognition that both ability and dedicated practice are essential challenges the grit-talent dichotomy that is raging in some education circles. This unnecessary division among educators pits the role of innate ability against so-called grit and resilience. Chess quickly dispels this false distinction.


2. Competition in chess is fun - but also steeped in a drive toward long-range goals. Winning is a stepping stone to a higher rating and a new level of competition in the next tournament - not an end goal. This is quite different from the finality of most grades, projects and presentations children are accustomed to in school. It also differs from some schools' attempts to devise artificial venues for competition, such as "field days" where half of the school competes against one another. Competition and education devoid of meaning provide few lasting benefits.


3. Most students shun academic risk-taking to avoid any chance of failing. Much has been written about the benefits accrued from failure experiences.  A recent article summed this up:


"Failure, and its close cousin, regret, teach foresight, problem-solving and (hopefully) better restraint next time. Failure also teaches us compassion and empathy, because it humbles us and knocks the smugness out of us. Best of all, it teaches resilience, which is surely the best trait any parent can foster in a child."

If schools could use failure as an opportunity for learning and personal growth (especially throughout grades K-8 when letter grades have no impact on college admissions), it could create a culture that is less risk-averse, less shame-based, and more focused on achieving meaningful and individualized progress.


4. Schools could start to group children based on ability, regardless of age. Rigid policies about kindergarten entrance dates, refusal to accelerate gifted students, and fears about intermingling students of different ages need to be reevaluated in light of what occurs in chess tournaments. Recognizing that children develop at different rates and a willingness to accommodate this will go a long way toward eliminating boredom at school for many children.


In an effort to develop innovative programming to help children of all abilities - from at-risk students to those who are gifted - schools could learn some lessons from chess. Although chess participants tend to be self-selecting, they still comprise people from a range of cultural and economic backgrounds, and include people of all ages who exhibit varied strengths and weaknesses. Schools might consider that what works at chess tournaments - meaningful competition, respectful engagement, grouping individuals based on ability rather than age, and using failure as a springboard for further growth - could work in schools as well.

What do you think?