Recent video of adolescent boys at the Lincoln Memorial in Washington, D.C., laughing and mocking Native American elder and veteran Nathan Phillips, have evoked shock and disgust. Many wonder how these teens could show such disrespect. While the camera focused on one boy's face, others were shown laughing in the background.


Call it what you want - racism, ignorance, mob mentality, or teenage stupidity - it is still abhorrent to witness. It evokes historic memories of systemic mockery, bullying and shaming of ethnic, racial and religious groups. We are not too far past the pre-Civil Rights-era South, or 1930's Germany, or even #metoo awareness. 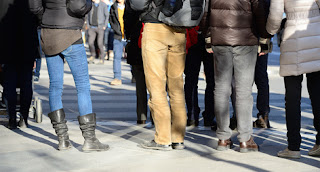 Social psychology reminds us that we often conform to the crowd, and even base our reactions on the behavior of those around us. Should we laugh? Panic? Assist that homeless person? Flee from a questionable looking individual? We look to others for cues.


And no one is more susceptible to peer pressure than adolescents, whose reputations rest on fitting in, appearing invulnerable, and yes, sometimes making fun of others. But joking with a friend about his new haircut is quite different from mocking his race, ethnicity, culture, religious affiliations or political beliefs. Other targets of bullying include differences in appearance, obesity, disabilities, lack of athletic talent, giftedness, gender differences, and refusal to conform to prevailing social norms.


So how did these boys at the Lincoln Memorial transition from typical adolescent pranks to the entitlement that engendered mocking an older adult? What empowered them to join together and embrace this attitude rather than merely allowing Nathan Phillips to continue on his path? Is it the school? Their parents? The prevailing political climate?


I would imagine that many of these boys' parents are feeling pretty awful right now, and school officials also are horrified. No one instructed them to behave in this manner.* Yet, the values of inclusion, diversity and respect do not appear to be ingrained in how these boys view their world.


I raised boys. And my boys did things I was not always proud of. Stupid things. Teenage things. All in the process of learning and growing up - like every other child. I made stupid mistakes also. I still do. But I can guarantee that my kids would not have participated in this mocking, shaming event that took place in D.C. Why not? They were fortunate to have experienced a neighborhood, community, school system and family where racial, ethnic, cultural, gender and religious diversity were the norm. Any conflict or bullying that took place within the schools typically involved personal insults, but almost never included racial/ethnic/religious slurs. It just was not part of this community's language.


Many of you with gifted children are aware of their heightened sensitivities, concerns with social justice and struggles to fit in with their peers. Although we don't know the specifics of what occurred at the Lincoln Memorial event, the interplay of confrontation between disparate groups is distressing. Please help your children continue to understand that remaining true to their sensitivities and recognizing the commonalities in all people will support their sense of fairness and justice. Remaining true to these values, especially on this Martin Luther King weekend, will engage their sense of purpose. Even if some of those around them are not so inclined.


*(Since writing this post, more information regarding the event has emerged, with conflicting viewpoints of what occurred. Out of respect for the students, who were apparently tormented by a hate group prior to the incident with Nathan Phillips, and who may have been startled and confused, I wanted to share this version of events.

The convergence of a black nationalist group, participants in a Native American rally, and students wearing MAGA hats at a pro-life rally may have resulted in more chaos than could be contained. And it was a distressing example of how confrontational behavior, presentation, and perception create impressions and influence viewpoints - for both members of a peer group who search for social cues, and for those of us affected by the media. If my original impressions of what occurred were wrong, I apologize for some of my written words about the students. However, the role of mob mentality, peer pressure, and the importance of encouraging a child's sense of fairness and justice still are relevant.)
Posted by Gail Post, Ph.D.