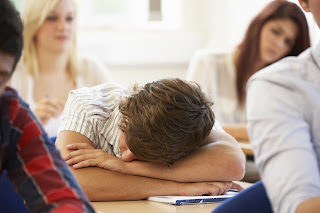 Unlike those gifted underachievers who struggle to attain even average grades, or drop out of school completely, gifted underachievers under-the-radar are not necessarily troubled with family conflicts or personal traits sometimes attributed to underachievers, such as insecurity or perfectionism. And while they may experience pressure to fit in with peers and conform to socio/cultural and gender stereotypes, most of these students are not plagued with emotional or psychological problems. They have become apathetic, complacent, and frustrated in response to an educational environment that has consistently ignored their needs - often for years.


Most gifted underachievers under-the-radar juggle several competing emotions related to their efforts. Frustrated and angry toward a system that labels their learning needs as less important than those of their classmates, they become cynical about what school has to offer them. Some also may feel betrayed by teachers who have misunderstood them, criticized their outside-the-box thinking, or failed to protect them from bullying.

Without the opportunity to tackle truly demanding academics, gifted underachievers under-the-radar develop a fragile sense of overconfidence. Cynical and critical of teachers and school, they may appear arrogant at times, but this attitude often masks underlying fears. Most realize that they lack the "self-regulation skills" (i.e., organizational strategies and study skills) that their classmates have mastered. When learning seems effortless, there is little incentive to apply strategies and skills that seem unnecessary at the time. Unfortunately, these students remain unprepared for more rigorous work when it finally arrives. Many gifted underachievers suspect that their lack of preparation will catch up with them. They worry that they will be exposed as "impostors" once they land in a more demanding learning environment, and may secretly doubt their abilities.

If you look carefully, you will find gifted underachievers under-the-radar coasting through schools everywhere. Some may hide behind average to above average grades; others may be stand-outs or even class valedictorians. None of them have tested their limits and they don't recognize the extent of their capabilities. As they get older and enter college, the work force, or adult relationships, they may "hit a wall." Lacking adequate organizational strategies, fearful of risks, and new to the business of exerting effort, they may struggle with self-doubt, increased apathy, and even feelings of anxiety and shame. It is a disservice for schools to neglect these talented students and assume that grades and test scores are sufficient evidence that they are thriving. These children need your help. Continued advocacy is needed so that even seemingly "successful" gifted students - those under the radar - are challenged to reach their potential.
Posted by Gail Post, Ph.D.