What stops girls from learning math?

Math is for geeks. Nerds. The robotics kids. Definitely not for girls.

Why do some girls go from budding math scholars in grade school to a “dumbed down” shell of themselves in high school? What happens to these gifted girls who love the logic, complexity and challenge of math, but feel they must forego their passion to fit in? 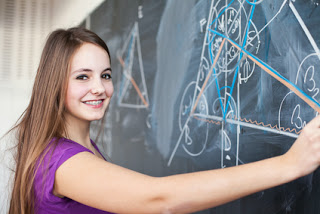 Girls actually excel at math and science, and most research has failed to find any striking differences between the genders in actual math ability1,2. Math is as interesting to the girls as it is to boys in grade school. Yet, few girls pursue math as a career choice in college. According to engineeringdegree.net, only 12% of engineering students are women, and 20% of women who received a math or science degree actually work in their field of study.
What, then, drives girls away from math?

Lack of role models. Until recent years, women typically shied away from math and science as career choices. Even gifted girls who thrived in math often pursued other paths as they got older, as they could not envision themselves in a STEM (science, technology, engineering, math) career. Some researchers have suggested that lack of encouragement and a shortage of female role models in math-related fields have contributed to the shortage. A study of math achievement data for 14-16 year-olds from almost half a million students in 69 countries concluded that boys were not better at math; they were just more confident3. In addition, girls from countries where there was more gender equity performed better on math assessment tests. Those who performed poorly resided in countries where women have been devalued and where there were few successful female role models. The authors concluded that the presence of female role models who excel in math is critical to girls’ future success.

The importance of female role models and confidence in girls’ math abilities was also highlighted in another study of first and second grade students4. Poor math performance among girls was more likely to occur when their female teachers were uncomfortable with math. However, the teachers’ math anxiety had no impact on the boys in the study. The researchers concluded that these teachers were viewed as role models, and may have inadvertently conveyed their own discomfort with math, affecting the girls’ performance.

Gender role identification. Given the scarcity of female role models, and assumptions about male superiority in math, it would follow that girls who hold clearly defined gender role distinctions might feel less comfortable pursuing math. For example, one study of college students found that women who strongly identified with gender role stereotypes, and who were more likely to view themselves as feminine, performed worse in an introductory calculus class than women who did not hold similar views. Although there were no significant differences in their SAT math scores, these young women also were less likely to pursue a math-oriented career5.

Peer pressure. Just as teachers and adult role models may influence math achievement, peer pressure also plays a key role. As they enter adolescence, girls often feel torn between confidently expressing their talents, as they had in elementary school, and suppressing their abilities to fit in and receive attention from boys. If prevailing stereotypes brand math skills as “nerdy” or masculine, and if girls lack the self-esteem to excel in “traditionally” male fields, they may choose popularity over academics. Recent research has shown, for example, that high school girls frequently rely on the opinions of their female friends when deciding what level of math to take, and whether they should take additional math classes6. Peers’ attitudes can ultimately influence self-perception, academic risk-taking, and future career choices.
Math anxiety. Insecurity and anxiety about math can manifest as full-blown panic during tests, obsessive preoccupation math performance, and avoidance of math classes when possible. It can contribute to poor grades, erode confidence in a range of academic abilities, and limit career goals. Although both genders experience math anxiety, a recent study7 supported previous findings indicating that girls were more likely to suffer from it than boys, and that math anxiety predicted poor test performance for girls, but not for boys.

So what can be done?

1.  Girls need exposure to women role models in math and the sciences, where they can see competent, vibrant women who excel in these fields. They need support so that they can embrace math without fear of being labeled “nerdy” or masculine in the process. Family encouragement is important, but schools also can offer opportunities for meeting women in math-related careers, or provide field trips to sites where women are employed in STEM careers.
2.  Negative stereotypes about women’s abilities must be challenged and confronted. Girls, parents and schools need to be educated about the effect gender role stereotyping plays in limiting girls’ math achievement. Gifted girls, in particular, need to find resources where they can engage their curiosity and interests, and allow themselves to appreciate their strengths. For example, actress Danica McKellar challenges adolescent resistance to math through books and a website, mathdoesntsuck.com, encouraging girls to excel at math.

3.  Try an anxiety-reduction plan to reduce anxiety about math. This could include gradual exposure to math-related situations, stress management and relaxation skills for approaching math problems, or challenging negative beliefs about math. Unrealistic expectations, perfectionism and self-doubt need to be challenged. Programs to address math anxiety are often available in guidance departments and college counseling centers. When math anxiety starts to affect self-esteem and erodes feelings of self-worth, though, therapy may be a helpful resource for understanding and managing the stress.

7.  Devine,  A. Fawcett, K. Szucs, D., % Dowler, A. (2012). Gender differences in mathematics anxiety and the relation to mathematics and performance while controlling for test anxiety. Behavioral and Brain Functions, 8, 33.